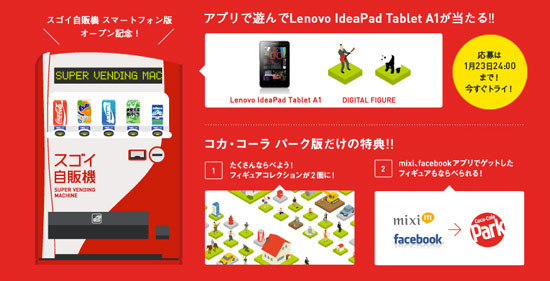 There are many brands under Coca Cola – my personal favourite is SO-KEN-Bi-CHA (super delicious and refreshing).

Last year CNET Japan published a list of the top 50 companies utilising Social Media for brand promotion (based on AMN’s study). Coca cola was number 1. There have been so many exciting campaigns running, so let’s take a look at this campaigns.

In 2007 Coca Cola created their own interactive digital platform called “Coca Cola Park”. Coca Cola Park is a portal site (a website that holds lots of information e.g. AOL. Yahoo & MSN) and performs well. As of March 2011 the number of registered Coca Cola Park members is now over 10,000,000 (according to their website).

Within the Coca Park they have created content that spans their different sub-brands. Users want to re-visit many times utilising games, point based systems and rewards. Traffic is also drawn from real products. When you buy a can of Georgia coffee, it comes with a small pin code sticker which customers can redeem online — users collect points, tapping into Japan’s all time favourite. Loyalty points.

One of the campaigns currently running is called “Sugoi Jihanki (Amazing Vending Machine)” spread across Coca Cola Park, Facebook and Mixi. Sugoin Jihanki is a virtual beverage vending machine app. You press the button to buy, for example, Fanta Orange, then you get various things including 1 million yen, original digital figures (virtual), tickets to win an Toshiba LCD TV etc.

After the product brand value is set, the marketing philosophy of Coca Cola focuses on how to deliver their message to consumers. Rather than tying themselves down to Social Media marketing, Coca Cola say that by studying their consumers’ trends they take action based upon the best communication tools available and the easiest contact points. They also try to continue all communication campaigns, rather than setting an end date. This is also applicable to their Social Media campaigns. All their accounts are open and responsive even after the campaign end date. Coca Cola say they take communication with customers seriously.

One additional note — for this campaign Coca Cola appointed high profile Japanese TV celebrities such as Mari Yaguchi & Oriental Radio as ‘official navigators’ to endorse the campaign. TV Celebrity endorsement is something that people love in Japan. You never see Brat Pitt, Sean Connery or Tommy Lee Jones starring in a TV advert for a canned coffee in the west. But you do in Japan.

Thanks,
Kana & the JAPAN BUZZ Team