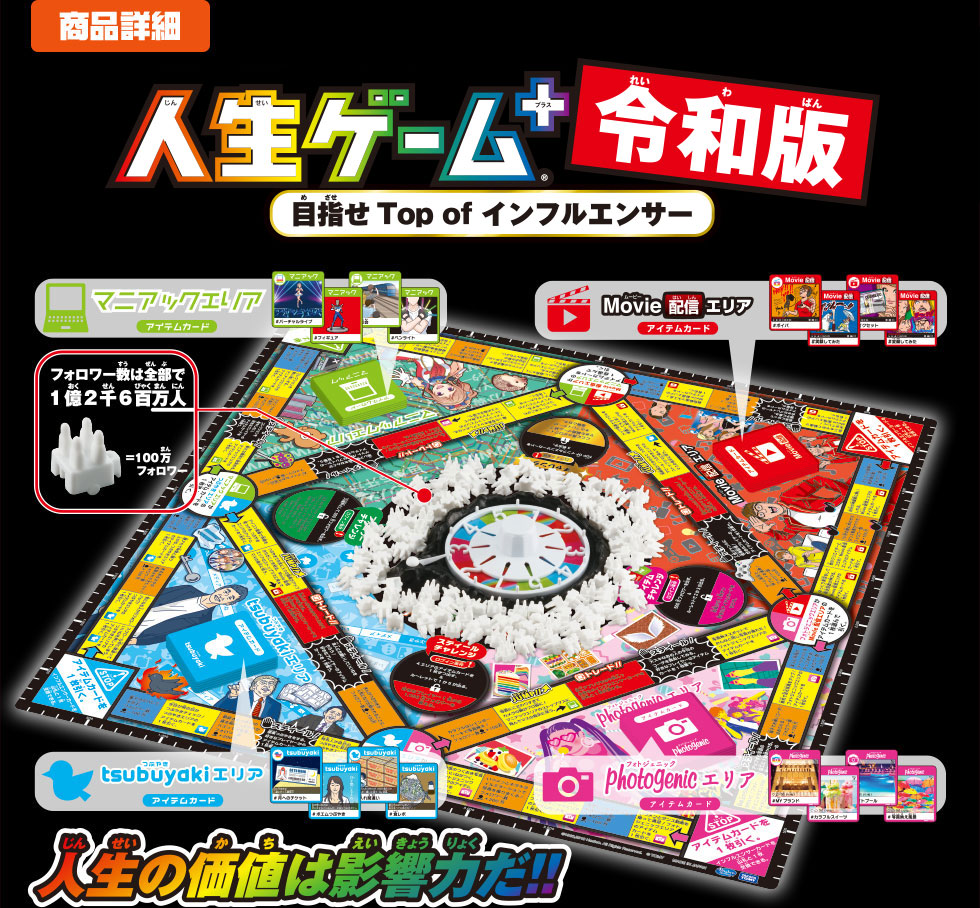 Remember sitting down as a kid and playing ‘The Game of Life’, more commonly known as ‘Life’, and having to choose a path from college all the way to retirement?  This popular board game has recently received an update from Takara Tony, a Japanese kids entertainment, announced for release in June of this year, the title will be called 人生ゲーム＋令和版 or ‘The Game of Life+ Reiwa Edition‘.

Unlike any other Life expansions before, ‘The Game of Life+ Reiwa Edition’ focuses on becoming the number one influencer.  Another unique feature of this expansion is that the focus is entirely on marketing yourself and expanding your audience, there are no bills, no career cards, no fixed courses, and no goals other than creating a following.  It’s the first game in the entire franchise to fully focus on strategy.

Similar to the standard Life gameplay you play by taking turns and rolling a dice.  Each person has a piece that represents them, along with “follower” pieces that connect to you, similar to a train.  Each follower piece represents 1 million followers with a potential to gain a max of 126 million followers (Japan’s total population).  The game is divided into four key areas: Tsubuyaki (Twitter), Photogenic (Instagram), Movie (Youtube), and Maniac (Enthusiasts). As you progress, the square you land on determines your action, such as drawing an influencer card such as The Top Virtual Idol which will give you 30,000,000 followers.  Users can gain followers by collecting the item cards that complete the criteria of influencer. You’re also able to negotiate and trade with other players during your turn. The game ends when each player has a total of 10 influencer cards.

Manga and Illustrator influencers in Japan
5th May 2020

The rise of the Stay-Home economy, how Japanese influencers are using creativity to inspire and engage followers.
30th March 2020