You are here:
Japanese InfluencersSocial Media 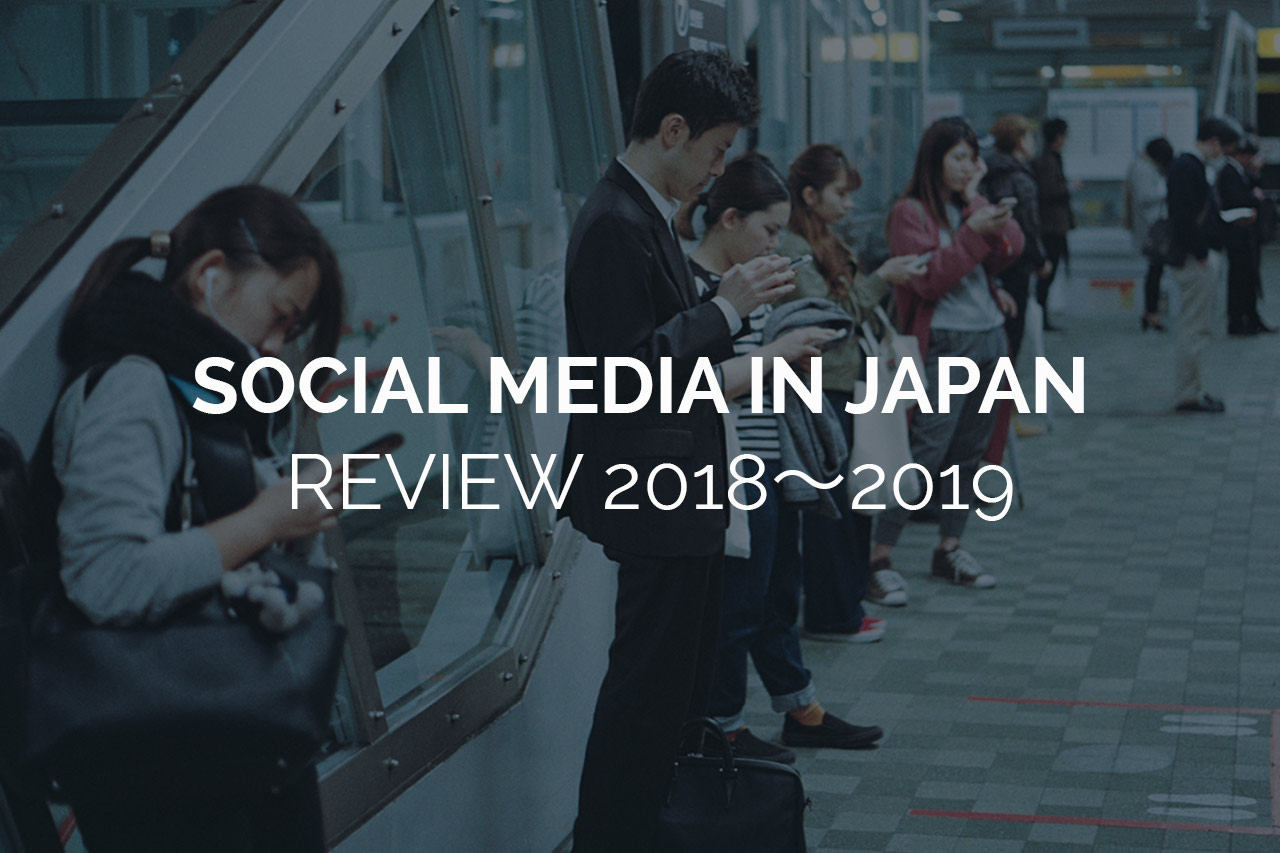 Time flies so fast – we’re already entering into the final quarter of 2018! Now is a great time to review major social media platform trends in Japan including one of the biggest marketing trends, Influencer Marketing. Looking ahead will allow us to plan for 2019, so let’s look at progress and prediction by social media platform.

It’ll come as no surprise, but the number of Instagram users in Japan is continuously growing. Instagram is the platform that holds the highest engagement of all. Traditional adverts are not reaching so many millennial hearts anymore. Instagram is increasingly being used for Influencer Marketing in Japan, just like other markets because it can generate higher engagement rates than other platforms. Japanese Social media users love to interact online and are digitally savvy, so engagement is key to influence potential customers for your business. It’s not all about the numbers though, quality of engagement is becoming increasingly important as so many businesses are using the same platform to reach their audience. If you can’t afford premium influencers then micro influencers with a moderate amount of followers are also able generate high engagement and gain good quality conversation. It’s important to find appropriate influencers and to work closely with them to generate the highest quality conversation, this will help your brand stay in the minds of the audience.

Our Prediction for 2019:
Instagram Japan will continue to grow it’s user base and will again be the favourite choice for Influencer Marketing. Rather than focusing only on simple single sponsored posts featuring products, we will see more creative ‘continuity’ spread out among Instagram Stories, Instagram posts and connectivity with external pages via links (on Stories). Instagram used to be a difficult platform to use when it came to sharing branded content such as video. Instagram Stories helped to overcome this issue so we expect the platform to be used more regularly by brands and businesses.

In general, Japanese people tend to shy away from creating videos of themselves talking straight into the camera and uploading to Instagram Stories, even influencers!. Whilst the world outside of Japan will focus on video content for promotion, it will be interesting to see how global campaign localisations will be done in Japan. For brands and agencies, in our opinion, it’ll be crucial to have specialists who really understand the mind of Japanese people. It’s best to collaborate with Japanese influencers to create content that actually works within the market and audience, rather than just pushing content that already worked in other markets, but might not be effective in Japan.

Twitter is still one of the most popular social media platforms in Japan, a place where users can gather useful information in real-time. For brands and businesses, this platform will remain as a useful tool to spread the word, especially when there are links to videos or articles to share. In most cases, we use Twitter as supportive platform, almost as an add-on. However for some specific topics such as live gaming, Twitter can be used to connect brands and audience.

Our Prediction:
Will remain stable. Twitter has become an essential tool for rapid information distribution for Japanese users and is considered part of the infrastructure. It’s a great platform to spread the word. On the other hand, negative sentiment can also happen on this platform and people in Japan are quick to pick it up. So make sure to monitor conversation around your brand, so you can act fast if anyone is saying anything negative. The Japanese media is often quick to report on flare ups, so if you handle it in the right way, it could lead your brand winning more trust from the public even if at the beginning the experience wasn’t so positive.

WordPress is a globally used blog system, but in Japan, Ameblo and Livedoor Blog are known to be the popular blogging platforms. LINE launched a blog site in 2015, and it was originally available only for celebrities. Ameblo is also used significantly by celebrities as well, but many have been shifting from Ameblo to LINE Blog. In 2016, LINE Blog made it’s platform available for everyone to use. Even though the number of users are still much lower than Ameblo for example, we’ve been seeing an increase in the number of popular celebrities making the transition from Ameblo to LINE Blog. More traditional bloggers seem to stay on Ameblo and other platforms such as Livedoor Blog. Nearly all the major Japanese blogging platforms have limits on what type of embedding can occur on their sites. So be mindful when it comes to tracking your campaign.

Our Prediction:
Will remain stable. There is currently no real mega international brand competitors for blogging platforms. Perhaps in the future when a service becomes popular that allows users to get paid, then local Japanese platforms will reduce in popularity. We don’t really believe the older Japanese platforms will all of a sudden open up their systems to brands & businesses, allowing the adding of pixel tracking and other analytical tools — so it will remain difficult. It’s a good idea to consult with specialists to help come up with different KPI or ways to measure. Currently Japanese blogging platforms are getting left behind when compared to other platforms who can provide useful analytics. However they are still many influential and very good long tail KOLs on these platforms.

Facebook has had a tough year with privacy issues. Facebook is used more by people aged over 30 in Japan, and in particular, by those who want to set up or expand their businesses to reach a wider network. The algorithm makes it very difficult to distribute sponsored content unless you’re working with influencers who have a very high engagement rate on every post.

Our Prediction:
Decline in use both privately and for promotion. Although the platform has many loyal users, Facebook has become quite a lonely place. There always seem to be more ghost users who don’t interact with the posts on Facebook but just browse to see who’s up to what. We’re all waiting for Facebook to change something so the content will reach more users or add some great features that Japanese users will find fun to use. To be honest, no one wants to use Stories on Facebook, they just want to use it on Instagram.

I know we are excited to see “LINE” here but we have to tell you LINE is more widely used as a messenger app just like Whatsapp! When you have so many apps that need social updates, its unsurprising that people in Japan aren’t really updating their LINE timelines. However we do see some efforts from brands in and outside of the country trying to reach users. Mainly LINE is useful for brands and businesses due to the fact that we can send each follower push notifications directly into the pockets of their target audience. It’s great if you can build a huge follower number, but it’s quite tricky as the LINE platform doesn’t assist for free. The Social Media part of the app, which is like Facebook’s timeline, isn’t so actively used and it’s hard to gather followers from inside of the app. Followers must be obtained from outside of the app using other platforms and basically giving audience some reason to follow. Typical bait for getting followers for LINE business account can be, vouchers, funny stamps, daily horoscopes, interesting information and others.

Our Prediction:
It will remain a popular app in the Japanese market, but it will not give your business the high engagement you might see on Instagram. Although the content you upload might gather some likes, Facebook might still give you more comments and better penetration into the conversation (if done right). Much like Facebook becoming a place for “brand chat” for businesses, LINE will remain popular for push notifications and 1 on 1 chat with brands. However content you upload onto LINE will probably be something similar to the Facebook timeline, which means it’s very difficult to get good engagement. Advertising opportunities are still there. If you’re based abroad, you will need an agency’s help with this.

People in Japan love YouTube and videos are great way of telling stories. There are a few characteristics of Japanese YouTube users worth noting.

1. Younger audience: YouTube Japan generally attracts a young audience in Japan.
2. Anonymity: Unlike other Social Media platforms popular in Japan, often users who comment have no content on their account, which gives a greater sense of anonymity. Once someone makes a negative comment, it can easily catch fire quite quickly so monitoring is important.

Although view counts and subscribers may be much lower compared to YouTube channels from English speaking countries, if you’re targeting a young Japanese audience, YouTube is great. Many channels in Japan though do tend to create walls between the creator and viewers just because it’s not as casual and spontaneous as other Social Media platforms. Often natural endorsement can be tough to achieve on YouTube Japan. Japanese YouTube management agencies often drive up the price and as a result if you want to work with individuals with a high amount of subscribers, prices are quite high.

If you’re running YouTube ads, do make sure the target is right as there’s nothing more annoying than having completely irrelevant content auto-played.

Our prediction:
It will stay popular as a great long tail platform. Video content can be very informative and effective. However there are competitions popping up such as Instagram stories, Instagram TV and other streaming type apps.

Our prediction:
We do want to see more growth for Linkedin to be honest as it’s a great platform. We’re seeing more and more BtoB content getting circulated in Japanese and it’s becoming a good BtoB platform to get some buzz going.

Also known as Douyin in China, TikTok is a Chinese music video Social Media app launched in late 2016. Users watch music videos and film themselves singing along to music. It’s one of the leading short video platforms in Asia and has 500 million monthly active users as of June 2018. The owners of TikTok also acquired Musicaly.ly, taking over the global audience and making it the world’s largest music video community.

The Karaoke loving nation, Japan, quickly discovered TikTok and teens are loving it. TikTok spread rapidly among the younger generation as they ran what Japanese audiences called “annoying ads” on YouTube which featured a series of users singing. They were so annoying that the audience loved talking about them, essentially helping them join the movement.

Our prediction:
To utilise this platform we’d need to run a campaign collaborating with users with a high follower numbers who are also above the age of 18. The Younger generation responds well to trends, so it’ll be essential to come up with some creative ideas to get to these youngsters’ hearts.

Thanks for reading and remember If you need any help with your Japanese social media or influencer strategy, then please get in touch!