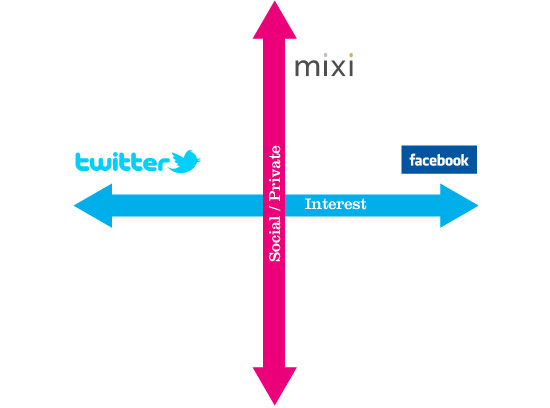 It’s still fresh in our memory — Mixi started a collaboration with Twitter at the end of November last year. The collaboration was triggered by the Great North East Japan Earthquake as both online spaces were subject to a massive amount of information exchange following 11 March 2011. If they collaborate it’s clear that these networks will become even more useful and something we can rely upon as part of an emergency infrastructure backup. In general though Mixi’s focus has been on private networking among real friends and family rather than building connections. ‪The Twitter/Mixi collaboration utilised an X and Y relationship to develop both services into a wider, deeper Social Media community. On the Y axis is Mixi, a private network and on the X axis is Twitter, enabling the connection of strangers through common interest. Their first collaboration project ‘Mixi Xmas 2011’ was a huge success with over 210,000 posts.‬

Collaboration among competitors works well when the collaboration creates value for both parties. Mixi is based on a private network style and Facebook is based on public network that uses real names. More than 70% of Mixi users are in their early 20’s and use nicknames which are only identifiable by their real friends and family (or families can’t identify them because they don’t use real names e.g. my brother!). So you can see how people are using these two Social Media networks. Mixi is used by people who want to control their network depth, people who want to stay in their comfort zone. Mr Kasahara, the CEO of Mixi, looks at the collaboration with Facebook positively citing the differences between the two Social Media networks. “As long as there is a difference between the two, then there must be a way to improve the usability of each other’s service for users registered with both”, he says.

In a similar way to their collaboration with Twitter, Mixi is willing to invest time and money on the ‘Interest Axis’ (X). For the time being though Mixi will remain focused as a private social/private network, developing it’s diary/blogging functionality for close friends and families. However with injection from the ‘Interest Axis’ through collaborating with other Social Media networks or creating their own space within it’s network, Mixi has a good chance of expansion. So they’ll be spending some time on the ‘Interest Axis’ this year to boost up the Mixi community.

Mixi is also interested in ‘Social Commerce’ using ‘SNS’ (the Japanese term for “Social Media”). On top of this we also know that their geographic information sharing service known as ‘’Pelo’ is coming out shortly. So that’s something to keep our eyes on.

So, how do all of this affect us? Well, it’s a promotion paradise for brands !

According to a study carried out in July of last year by facenavi of 6,380 registered pages, the number of ‘like’ increased by 1.73 in the three months from April 2011. These are slightly older statistics, but enough to show that Facebook campaigns are getting increasingly popular. During the three months from April to July 2011, famous brands like Starbucks, au, NTT docomo and Toyota opened up Japanese Facebook pages. This movement has been around for some time and we are seeing brands from large to small opening up their pages and winning fans (like) on Facebook.

With the growing number of branded Facebook pages, we can expect to see more penetrative, “deep brand campaigns” once Mixi and Facebook start the collaboration. Facebook to catch and spread the trends and Mixi to chew up the topic/campaign in a more intimate environment with close friends and families. Power of ‘Kuchikomi’ (Word-of-Mouth) is huge in Japan. Through Facebook and Twitter, we can get so much information … but do we really trust everything we get there? The answer to that of course should be ‘no!’

However if your friends from real life recommend something on Mixi you’re likely to give it a try. Even if you didn’t, your friends will be recommending brands and you’ll hear or see them talking about it. So in the end you’ll be you’ll be doing it anyway!

JAPAN BUZZ TEAM would love to hear from you. Let us know if you have any topics you’d like us to dig up! Any comments are highly appreciated!

Thanks,
Kana & the JAPAN BUZZ Team