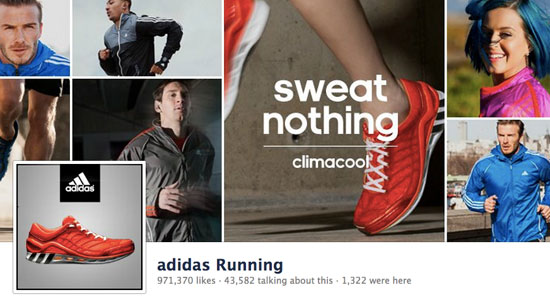 Tokyo Marathon Foundation held a marathon event, ‘Smile Fun Run in Odaiba’ gathering appx 1,000 runners on 20th May 2012. Runners were asked to touch a special scanner with a wristband handed out by the hosts to automatically “Like” the event. Tokyo Marathon Foundation handed out wristbands to over 50 runners who were chosen from the competition which happened prior to this event.

The “Real Like” system was developed by Kappan Insatsu in November 2011. In collaboration with CyberAgent, the system has been used for stores, commercial facilities and corporate events. The system is known as next promotion system in Japan.

Similarly, FIT Digital (http://www.fitdigital.co.uk/) has recently supported Adidas with a Facebook check-in system for their running event (adidas Running: http://www.facebook.com/adidasRunning). We’ve developed a Facebook app that only allows users who checked into a location to enter the competition. Using the location ID, we were able to identify which user checked into the specific location which was specified by Adidas. Everyone has mobiles phones with them, so this system is a cost effective solution for public events.