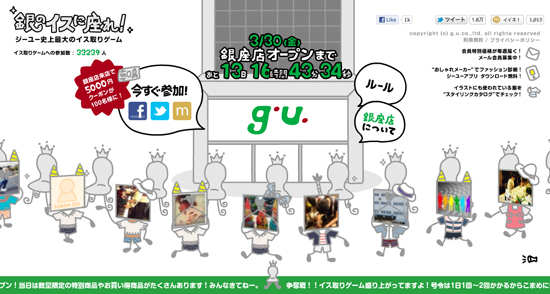 Late last year, Uniqlo did another check-in campaign celebrating the establishment of the company. The total check-in numbers of the campaign exceeded 202K. The target for this campaign was the whole of Japan.

While the big papa UNIQLO is hitting the Tokyo audience, mini UNIQLO, g.u., a cheaper sister brand which sells jeans for the unbelievable price of 990 yen, is spreading the word through a musical chair campaign counting down the opening of the Ginza store on the 30th March 2012.

How it works:
The face for this campaign is a microsite — Users participate using either a Facebook, Twitter or Mixi account. Users then have to wait until they’ve been ordered to “Sit down on the silver chair” via a notification that comes in once/twice a day.

Users can win a 500 yen coupon. This campaign is designed for users to try as many times as they like by providing various opportunities to participate.

What’s consistent though, is the music. I noticed Japanese Social Media campaigns always come with crazy music that stays in your mind either even if like it or not. Not my favourite part, but I guess it’s working….?! I tend to hit mute when I review any Japanese campaigns now. I’m not a big fan of this tactic!

Also, I have been thinking of the shrinking number campaigns using Mixi. We all know Mixi is a closed world and is not suitable for spreading the word. I think for g.u. campaign it was quite easy to sync the profile pictures from Twitter, Facebook and Mixi using the various APIs. But when it comes to rich content sharing, Facebook is the best for its flexibility, openness and of course the fact that it’s a platform that’s specially altered for brand promotions. Twitter is of course is still a loud bird we always need to utilise!

Thanks
Kana & The Japan Buzz