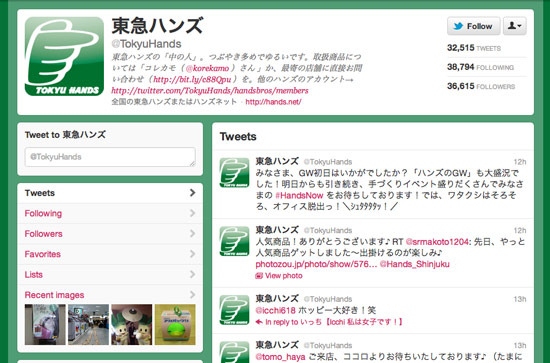 In Japan, Social Media is considered to be a place for individuals and business accounts. This can also be said about the western market. We as individuals surf through Social Media interacting with friends and getting interesting information shared by the people we follow. Also we know people do share information companies share on their pages. What we should remember in the Japanese Social Media scene though, is that we need to have ‘base relationship’ with the user before introducing a new service or product, so that it doesn’t appear too much like a sales activity. Also the information companies release needs to be interesting enough to be shared by users. If users think it’s useful for others too, then they wil share.

Tokyu Hands has always been one of my favourite stores in Japan. (They have pretty much everything we need in the shop.) And they have been making very good use of their Twitter account. Twitter is a good place to have one-on-one interaction with other users. The reason they are so good at Twitter marketing is their balance between ‘responses’, ‘chit-chat’ and ‘sales talk’. Half of their tweets are dominated by their responses to individuals.

Responses are mainly based on replying to users or reacting to users mentioning about Tokyu Hands. Chit-chat is done to show familiarity. And lastly they spend appx 20% of their tweets releasing sales & marketing information of their business.

1.Tweet something fun at the same time everyday.
2. Respond to ‘replies’ as much as you can.
3. Search by ‘Hands (Tokyu Hands)’ and actively respond to interesting ones.
4. Try to keep variety in what you’re tweeting.
5. Try not to destroy someone’s conversation, keep harmony.
6. If there’s something you couldn’t answer, make suggestions such as introducing the nearest branch.
7. Try to tweet with photos from inside the store, showcasing new products.
8. Tweet natural, there is no need to be someone you’re not.
9. Keep the same mannerism in Twitter and in the stores.
10. The company Twitter account should never get depressed or be disappointed