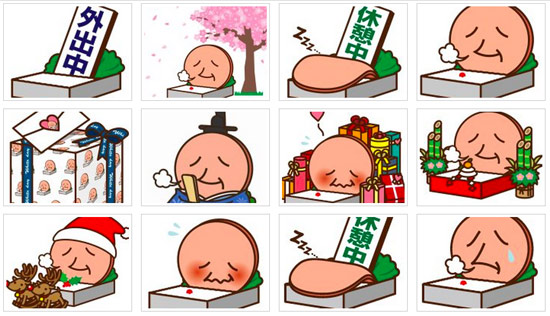 Japan has always been known as a nation with big passion for characters/mascots. One of the biggest Japanese Ham companies, Ito Ham, has attracted over 22,000 fans using this.

Hamu Kakaricho (Section boss Mr Ham) is a ‘SNS character/mascot’ of Ito Ham. It’s basically ham stuck in a bento box right next to white rice with a pickled plum — sitting on a bed of lettuce. He has number of different facial expressions but in general he is slightly tired or in distress with a little sigh by his face. It seems the bento box he’s in performs as his body which we can see in the cover image of the Facebook page.

He rules the Social Media pages of Ito Ham, employed as section boss. He has a proven track record of response speed and he shows great care and customer service mannerism. The interaction between fans and Hamu Kakaricho is actually quite fun to read — and fans love recipe suggestions Hamu Kakaricho makes. Everyone feels like being a friend with him because of his friendly responses.

He even has his own emoticon like this ε=(公 ）.

So, the section boss Mr Ham is obviously not just a ham that’s good at responding on Facebook. It’s a member of Marketing department of Ito Ham. He’s decided to use Mr Ham to get closer to the consumers. He says to NHK, “without a tool of Hamu Kakaricho, we couldn’t possibly interact with the consumers in a friendly manner. So it’s a huge win.”

Hamu Kakaricho’s slightly tired face is strangely familiar to us. When I think of ‘section bosses’, I guess I have an image of slightly tired looking men (I’m not trying to be sexist. But I guess this is an influence from Japanese TV soaps built up over time). And when you look at Hamu Kakaricho with a little sigh by his face, you would feel like being nice and want to encourage him.

Ito Ham also never forgets to entertain, with some fun content, like a 4 scene comic ‘Hamu Kakaricho’s little mumble’ every now and then.